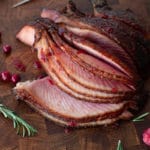 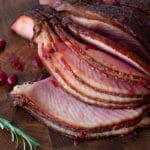 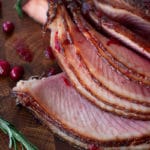 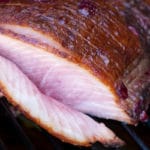 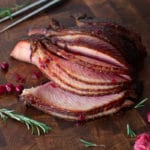 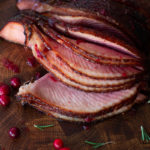 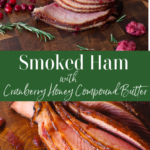 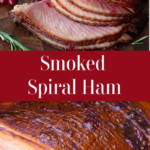 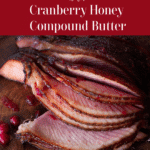 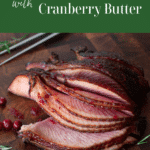 This is the most delicious and flavorful smoked ham that is covered in a rich and creamy homemade cranberry honey butter. It's the perfect holiday ham that is smoked to perfection and ready to grace your dinner table this holiday season!

Why This Is The Best Smoked Ham Recipe: Smoking a ham requires minimal effort. The prep is simple and the smoking processes is hands off.

How Long It Takes: only 20 minutes to prep, and 3 hours to smoke

Smoked ham has never been so easy to make! Covered in a simple cranberry butter, this makes for the best Christmas ham! It's also great for Easter! Smoked low and slow, this ham smoker recipe forms the most delicious and succulent sweet crust. Even if you're new to smoking meat, this recipe is simple enough for a beginner. And it's especially easy for people who have been smoking meat for years.

When you buy a ham at the grocery store or from a butcher shop, most of the time it is fully pre-cooked and has either already been cured, smoked, or baked. This recipe works well on any pre-cooked ham, but it especially tastes good on a pre-smoked ham. A double smoked ham is simply putting an already smoked ham back on the smoker and reheating it a second time to add extra smoke, flavor, and moisture. Regardless of what type of ham you are smoking, the process for making this smoked ham recipe is easy and doesn't require a full days worth of smoking like it does when smoking a brisket or smoked pork shoulder.

ℹ️ Why This Recipe Works

1. The taste of this smoked ham is by far one of the most incomparable flavors you will get, especially since it is covered in a cranberry butter and brown sugar.

2. Using a fully pre-cooked ham takes all the work and effort out of this ham smoker recipe.

3. It's almost effortless. Prepare and light the smoker, set it, and forget it. It really is that easy!

All you need is a fully-cooked ham and four simple ingredients to make the compound butter.

If you're feeding 6 to 8 people, you'll need 3-4 pounds of boneless ham. When making the compound butter, use unsalted butter because the meat is already naturally salty. I'm a big fan of using unsalted butter in most recipes because it allows me to control the level of saltiness in a dish. It doesn't matter if your cranberries are fresh or frozen, just don't use canned cranberries when making the butter. Fresh is best.

There are several different types available for purchase. And there are a lot of options to consider when purchasing a ham. When it comes to smoking a ham, my preference is to use a spiral ham because of how flavorful and tender it turns out. It is easy to find and one of the most common types you'll find during the holiday season. And, they come in all different sizes. It gets its name because it's sliced in one continuous spiral, leaving the meat on the bone in its original shape.

City hams are also very common and can be found at most grocery stores. They come whole, are wet cured, and typically smoked. While they are readily available, they are typically very large, weighing in between 15-25 pounds. Because of their size, they're usually cut into a butt and a shank portion, with the butt yielding larger slices. You'll find that some are boneless while others are a bone in.

When it comes to this recipe, it doesn't matter if you have a ham on the bone or if it's boneless. It comes down to convenience and individual preference. A pre-cooked and ready-to-eat ham can be purchased as both boneless and bone in versions. A lot of people really like a bone in ham because it looks amazing is extremely juicy as well as very tender. But it is really hard to slice, which is why I chose boneless for this recipe.

🔪 How To Smoke A Ham

When making the compound butter, you'll split the batch into 2 different piles. One pile will be for covering the meat before placing it on the smoker. The remaining pile will be placed on parchment paper and then rolled into a tube to be refrigerated until firm.

After the compound butter is made, prepare the smoker accordingly and preheat it to 225°F. While the smoker is preheating, cover the ham with the remaining non-refrigerated cranberry butter. Use your hands or a bastings brush to ensure it's spread evenly. Then, add 2 tablespoons of brown sugar on top of the butter mixture.

When the smoker has preheated, place the meat directly on the smoker rack. Insert a digital meat thermometer into the center.

👩‍🍳 Chef's Note: You can purchase a pre-sliced or whole ham. For this recipe, I like buying a pre-sliced ham because I can really get the cranberry compound butter deep into the crevices of each slice. Some feel it's hard to smoke a pre-sliced ham, but if you insert a digital thermometer into the middle of the sliced ham, it won't separate and dry out while it smokes.

Once the meat is on the smoker rack, let the it smoke low and slow. There is no need to move or turn it. The ham is considered done when the thermometer reaches 145°F, which will take between 2-3 hours depending on the size. Even though the ham is already pre-cooked, the internal temp still needs to reach 145°F to ensure it is hot all the way through.

Since it's smoked low and slow, the outside layer has time to form the most delectable golden brown crust. It's incredibly flavorful and adds both depth and texture to every bite!

Now you're ready to enjoy one of the best smoked hams you'll ever eat. Learning how to cook a smoked ham has never been easier and is incredibly tasty! Serve it with a side of mashed sweet potatoes and these roasted green beans!

Store any leftovers in a container with a lid in the refrigerator for 3-4 days.
While it can be reheated in the microwave, for best results reheat the slices in a skillet on the stovetop or in the oven until warm. Both of these reheating methods will ensure the meat doesn't dry out.

Yes! If the label on the package states that it is baked, cured, or smoked, the ham is already fully cooked. A lot of labels will also include the words "fully-cooked". When in doubt, ask the butcher in the meat department to make sure.

How long do you cook a smoked ham?

Depending on the size, it will take 2-3 hours to cook on the smoker. It takes about 20 minutes per pound so plan accordingly. When an internal meat thermometer reaches 145°F, the ham is done.

How can I use leftover ham?

If you have leftovers, use it to make a sandwich. Or, add small cut up pieces when making a pot of white beans or a white bean soup. Adding ham to scalloped potatoes is also quite tasty!

If you're loving all my smoker recipes, then you have to make sure and try my Applewood Smoker Chicken. People RAVE over this recipe and yes, it's really that delicious! I have an entire collection of smoked meat recipes and even some smoked side dishes. Check out my collection here.

And if you’re looking for more smoker recipes, check out my latest cookbook, Smoking Meat Made Easy.  This is your ultimate guide to backyard smoking and features 65 smoker recipes! You can master the most flavorful techniques, with dozens of options that are easy to follow, and work with any type of smoker.

Never miss a recipe! Sign up for my newsletter and get all the free recipes every time I create a new one! 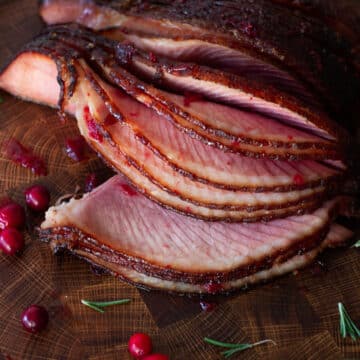 This is the most delicious and flavorful smoked ham that is covered in a rich and creamy homemade cranberry honey butter. It's the perfect holiday ham that is smoked to perfection and ready to grace your dinner table this holiday season!
No ratings yet
Print Pin Rate
Course: dinner
Cuisine: American
Prep Time: 20 minutes
Cook Time: 3 hours
Total Time: 3 hours 20 minutes
Servings: 8 people
Calories: 623kcal
Author: Amanda Mason

For The Cranberry Honey Compound Butter

To Make The Compound Butter

To Smoke The Ham

Hi, I'm Amanda! Welcome to my little corner of the internet. I'm a wife, mother of two, lover of all things food and wine, and photographer. Here at Recipes Worth Repeating, you're going to find the most delicious and easy to make recipes everyone will love.